A Modern History of Circles in Architecture

Some of today’s buildings are bewildering in their technological innovations. From Frank Gehry’s undulating façades to Zaha Hadid’s swooping structures, modern engineering has allowed architecture to transcend tradition. Complex structures and gestures aside, there’s something to be said about the elegance of bold, basic geometry.

After all, the Ancient Greeks built entire empires on the principles of geometry and proportion of basic shapes such as the triangle. This chronological collection of projects charts the recent history of circles in architecture, exploring how the shape can lend projects their identity, add an element of surprise or play a role in a larger system of strong geometries.

The circular window and modular design gives this icon of the Japanese Metabolist movement its distinctive, easily recognizable appearance. Each capsule features a centrally placed window that illuminates each modular space.

Via The Architecture Blog

It’s practically illegal to talk about strong geometry in architecture and not mention Louis Kahn. The architect’s monumental buildings are iconic in their use of circular, square and triangular motifs. This library’s dramatic atrium features enormous circular openings that offer views into the book stacks.

Scarpa’s remarkable cemetery outside of Venice demonstrates the modernist Italian architect’s intimate knowledge of and respect for raw materials. His interest in geometry and the interplay between positive and negative space is evident throughout this mysterious space that feels at once ancient and modern. Two intersecting circles make up the “viewing device” in the pavilion of meditation, forming the vesica piscis motif featured in both Christian art and Euclidian geometry.

Photography by Hans Werlemann, via OMA

This unusual, machine-like home by OMA is conceived as not one house but three houses on top of each other. A cut-out circle motif recurs throughout the house in different expressions. A port hole window from the bedroom looks out onto the landscape. A similar form is cut into the stone on the exterior property wall. Smaller circular windows permeate one façade, and a final one is a part of the large movable curtain wall. 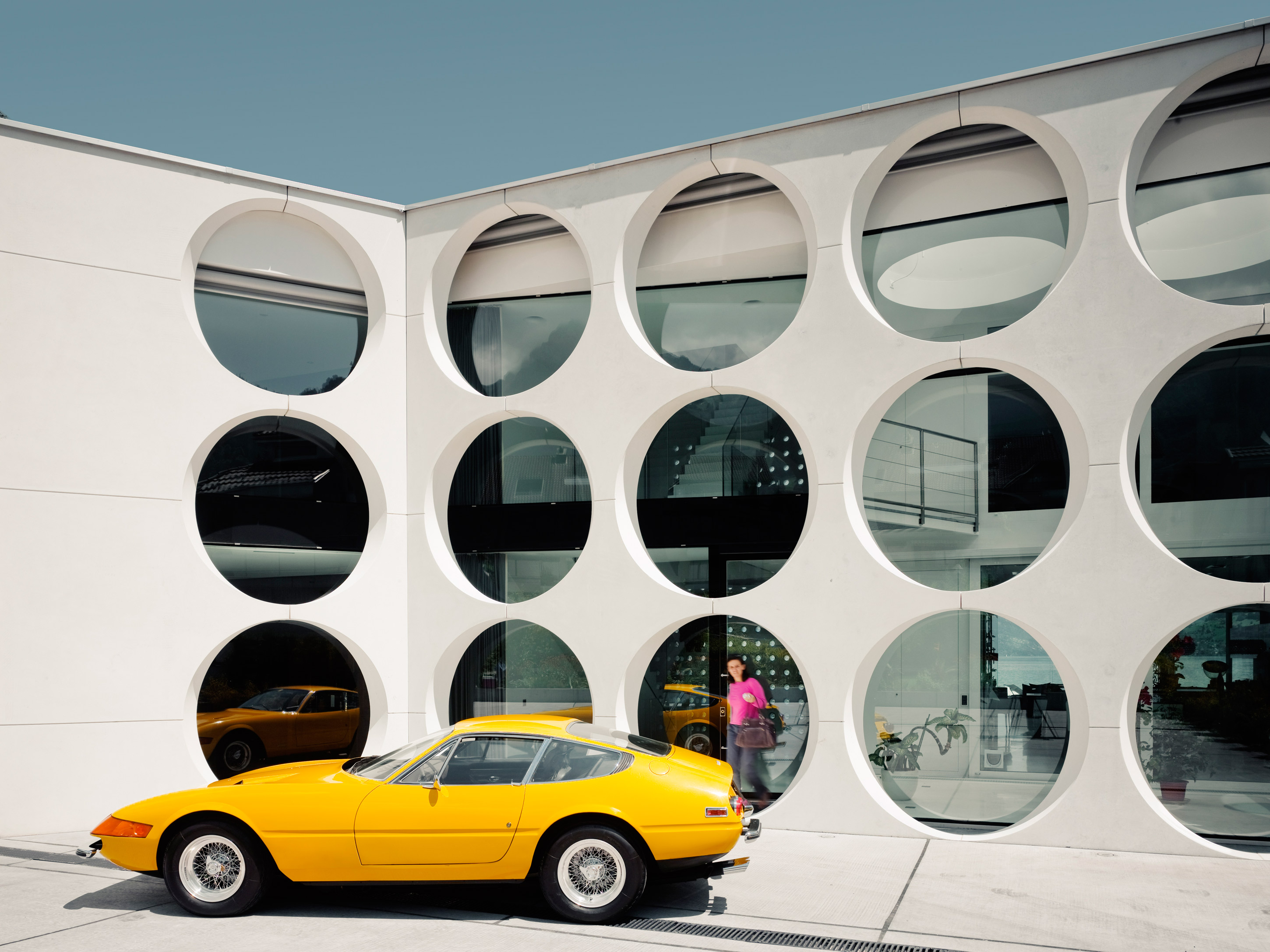 This sculptural villa’s white concrete façade is defined by its large, repeated circular openings. These large windows frame the view out into the house’s lush surroundings in an unusual way. The circular patterning is repeated at a smaller scale as a brise-soleil on the opposite side of the O House, providing shade and privacy for the residents.

Architecture student Joanne Chen designed this factory for artisans as part of her Master’s program at the Bartlett School of Architecture in London. Its circular entryway quotes that of Scarpa’s Brion Cemetery, whose beauty fittingly lies in its attention to detail and craftsmanship. The rest of the project demonstrates a reverence for the glint of brass and luster of marble which are put to use as other bold geometric forms throughout this stunning factory.

House in the top of a mountain by Kenji Hashimoto Architecture, Hyogo Prefecture, Japan

This house is filled with a number of fragments of circles that make arcing gestures, from the roof to the curve of the interior spiral staircase railing. After building up our interest in curves, the architect delivers a full circle, cutting it into the white stucco wall and creating a connection between other strong geometries: squares are found in both the window and the perfectly sharp staircase steps.

What A Salad by QNA Architecture Lab, Seoul, South Korea

Who knew a salad restaurant could have such a striking interior design? This high-end restaurant features a back room that is accessed via an elegant oak-clad circular entryway. Its roundedness complements the geometric pattern of the grid of the glowing ceiling that runs through the space.

The post A Modern History of Circles in Architecture appeared first on Journal.