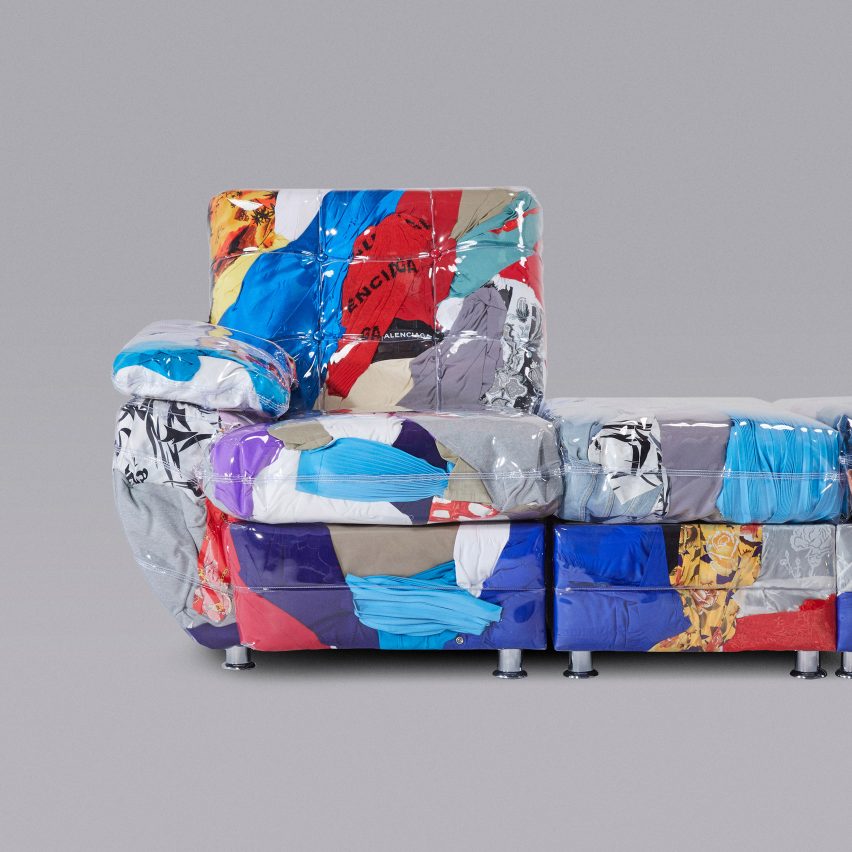 Crosby Studios’ founder Harry Nuriev has teamed up with Balenciaga to create a transparent vinyl couch filled with worn and discarded clothing from the French fashion brand.

Architect and designer Nuriev and Balenciaga unveiled the oblong couch at this year’s Design Miami 2019. It is intended to promote “environmentally conscious design” by converting worn or disposed garments into a functional piece of art.

“The collaboration between Balenciaga and Nuriev reimagines a sofa – the centre of so many homes – as an example of environmentally conscious design, giving generations of garments and other materials another life,” the fashion brand said. 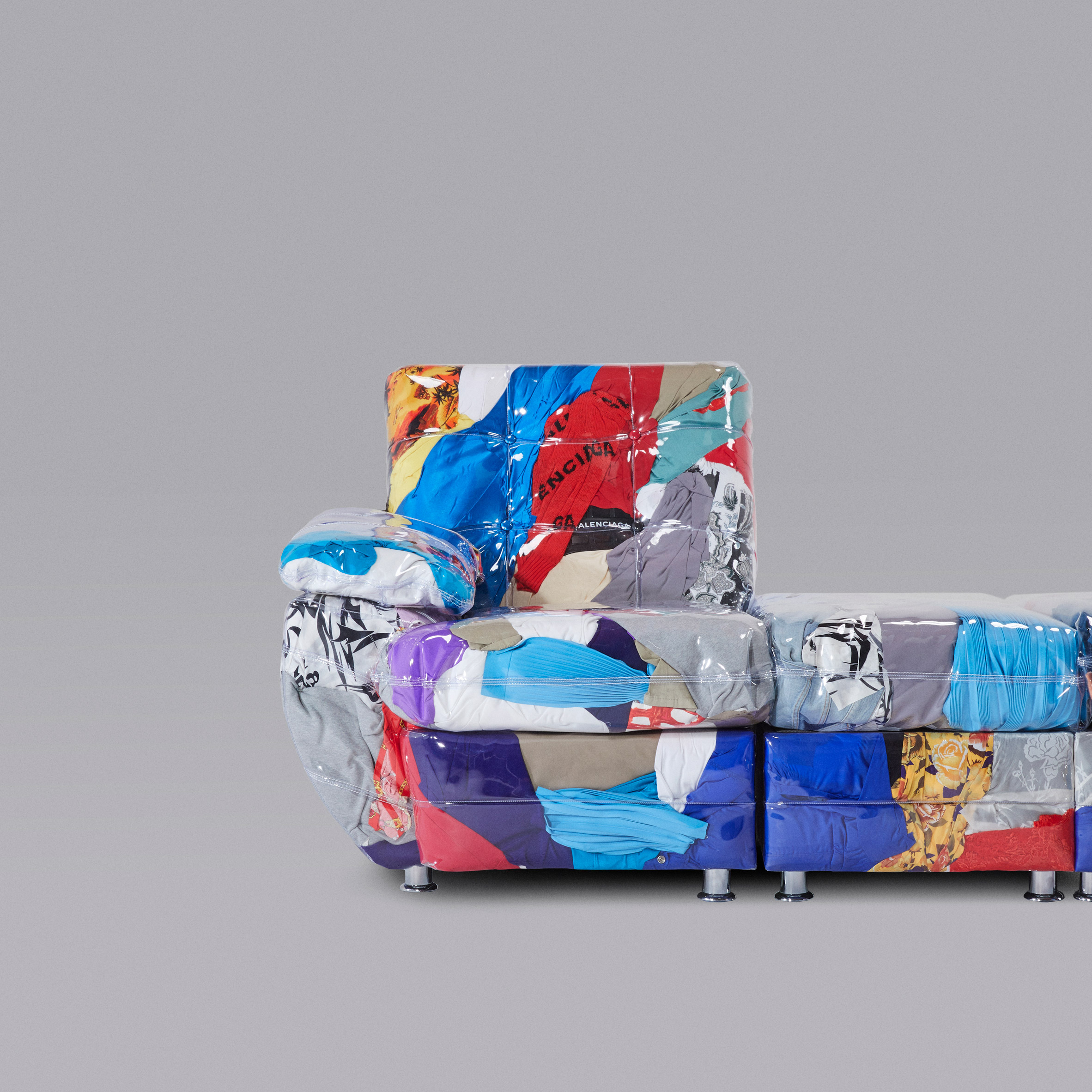 The Balenciaga Sofa is stuffed with clothing that is either damaged, unsellable or from obsolete stocks of Balenciaga clothing to acknowledge the brand’s responsibility to offset its environmental impact and also to encourage fellow designers to think about how their products could be reused.

“Intended to encourage sustainable practices within design and elsewhere, the piece reflects Balenciaga’s recognition of the responsibility designers have to counterbalance their environmental impact, and dedication to implementing programmes that upcycle waste and contribute to a “circular economy,” the company continued.

The clothes are compacted inside a vinyl transparent covering allowing the garments’ colours, patterns and tags to be easily seen. Articles include a mix of textures and fabrics, and feature designs from past seasons and previous collections.

The sofa’s form is reminiscent of an overstuffed recliner. In addition to its row of seat cushions, the duo has attached an extendable footrest to the design along with an armrest and set of pillows, all filled with used clothes. 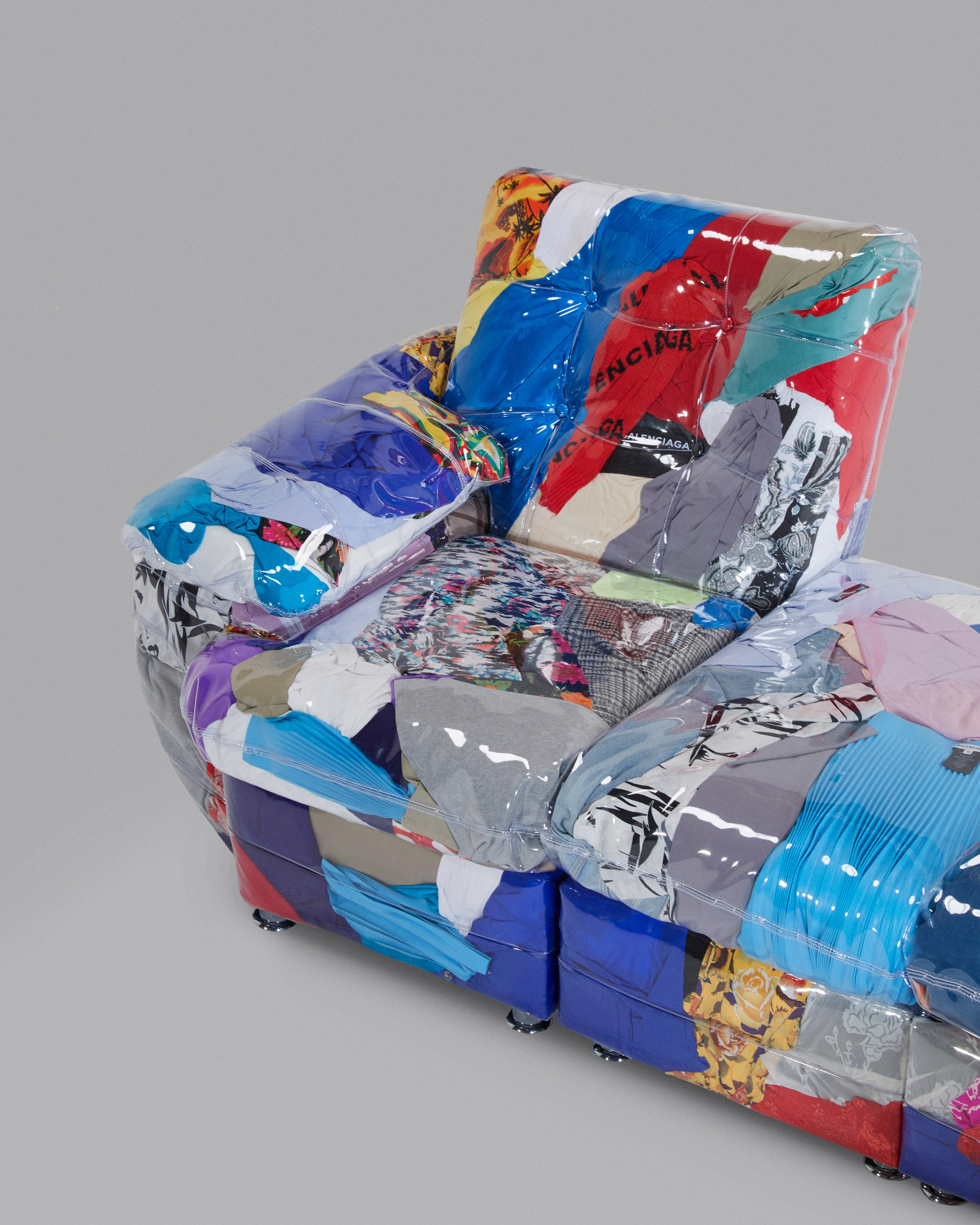 An array of buttons detail the piece’s backrest and stitched seams along the edge of the cushions add to the sofa’s traditional appearance.

Balenciaga is a French fashion brand started by Spanish-born Cristóbal Balenciaga in 1917. The sofa follows a number of its unconventional designs, which have included a large tote that mimics IKEA’s iconic blue shopping bag and a long-sleeved, collared shirt attached to a plain t-shirt.

Nuriev founded interior architecture and furniture design firm Crosby Studios in Moscow in 2014, and is now based in New York. His other projects include a series of purple furniture and home accessories that features a recurring hand design and a restaurant in Moscow with a Memphis-influenced exterior.

Running from 3 to 9 December 2019, Design Miami forms part of a host of activities and installations taking place in the city for the annual art week. Other highlights during the 2019  event include an inflatable bubble gallery and a sand-covered traffic jam.